CENTENNIAL THEATRE PUMPS UP THE VOLUME 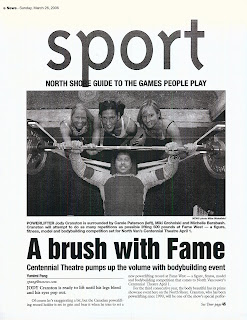 From the North Shore News, Sunday March 26, 2006...
A brush with Fame: Centennial Theatre pumps up the volume with bodybuilding event

Jody Cranston is ready to lift until his legs bleed and his eyes pop out.

Of course he's exaggerating a bit, but the Canadian powerlifting record holder is set to grin and bear it when he tries to set a new powerlifting record at Fame West -- a figure, fitness, model and bodybuilding competition that comes to North Vancouver's Centennial Theatre April 1.

For the third consecutive year, the body beautiful has its prime showcase event here on the North Shore. Cranston, who has been powerlifting since 1993, will be one of the show's special performances. There's no question that 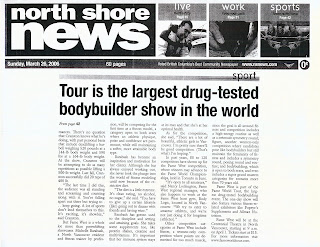 Cranston knows what he's doing, with past personal bests that include deadlifting a barbell weighing 520 pounds at a 144-lb body weight and 590 lbs at a 164-lb body weight. At the show, Cranston will be attempting to do as many repetitions as possible lifting a 500-lb weight. Last fall, Cranston successfully did 20 reps of 400 lb. ...


Click on the pictures to the right to see the full article.