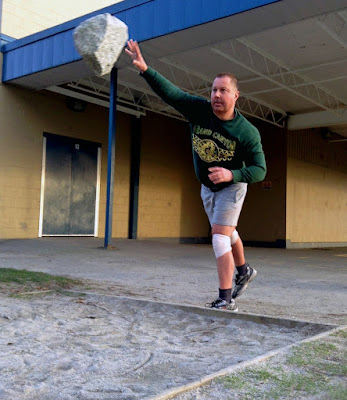 Jody Cranston simply refuses to rest on his laurels.
Two years ago he was recognized at the annual Richmond Sports Awards as the 2016 Master Athlete of the Year. That honour simply further fuelled his motivation. Recently, the distinguished local powerlifter tried his hand at another feat of strength: throwing stones. Literally.

“I love competing and challenging myself,” Cranston explains. “I think that all started when I set goals to meet my early powerlifting years back. It always feels great to set a goal and meet it.”

So he signed on to represent Richmond at the 22nd Amateur Athletic Union-sanctioned Feats of Strength contest at Alki Beach in Seattle. He came away having set a Canadian masters record in the 72-pound stone throw event. Competing in the 198-pound division, he threw the stone 11.75 feet.

“I took about a year to work on the technique,” says Cranston, adding trying to keep up with his 11-year-old daughter Taila and all her sports and activities helps too.

He also extends credit to his coach Gary Fee.

“Stone throwing and the track and field throws are gaining in popularity,” Cranston says. “It is great to be able to include outdoor training (an all-year initiative) to the indoor weight, power and gym training.”

Owner of Connection: Corporate Health, a fitness centre in Vancouver since 2011, Cranston began Powershape Personal Training in 1997. He is also a partner in Oranj Fitness with locations from B.C. to Ontario.

Cranston won gold in powerlifting at the BC Winter Games and set the provincial weight throw record for masters-aged (45 years and older) athletes. He’s also excelled at the bench press, with a best deadlift of 590 pounds.

The first-place finish in the stone throw qualifies Cranston for the AAU world championships in Las Vegas this fall.

His advice to others: “Whether it is stone throwing, powerlifting or any sport for that matter, find something you enjoy doing and put in the work. There is no down side to this.”

Posted by Powershape / Jody Cranston at 9:41 AM