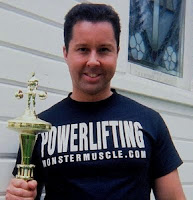 Cranston, who owns a Fitness Studio in Vancouver, has represented Richmond at lifting tournaments since he started competing in 1994.